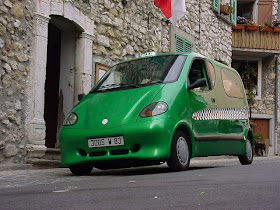 According to the Blacksmith Institute, Toxic pollution poses health risks to over 100 million people. Moreover, with rising fuel prices, there is a potential demand for alternative fuel vehicles. Keeping that in consideration french motor company MDI started to build air cars. Even though it is a new concept and there is space for large amounts of experiments in this field, Companies started the production of cars based on this concept as shown by the Sundial list of 2010 air cars.

As it is still emerging technology, I think this is a good project for mechanical students.

Compressed Air Car is a car that uses compressed air as its fuel. It uses a concept of the steam engine, the only difference is, at the place of steam it uses air.

How stuff works website can help you to understand the air-fuel car concept :
How Air Cars Works?

What is Compressed Air?

Compressed air is air which is kept under a certain pressure, usually greater than that of the atmosphere.


To compress air, we use air compressors. These compressors take air from the atmosphere and store it into the cylinder. When the amount of air increase in the cylinder , the pressure of air started to rise.

Students of various universities have started to work on this technology, few of there reports in pdf format are given below :
Northeastern university Compressed Air engine: The EOS